Heads of state or government of the member states of the European Union have a dual role: they are and remain holders of domestic executive offi ces, but at the same time members of the European Council – the EU institution that is the centre of political authority within the Union. This membership, approached here from a constitutional and historical perspective, is autonomous to the extent that it is attributed to the heads of state or government and substantively determined by the EU’s constitution. It is a key part of the EU structure and fundamental for comprehending the executive branches of the Union and of the member states as well as their relationship. The present study analyses the force of the dualitythat membership entails for the accumulation of authority within the European Council. It investigates for a number of member states – The Netherlands, Belgium and Germany – whether and how European Council membership has become compatible with and has affected domestic constitutional positions, domestic executive institutions and systems at large. It contributes to the understanding of the relation between national executives and the Union. While this relation is usually considered as one-dimensional, this study shows that the situation is more complex and interesting.

David Nederlof is lecturer in EU law and member of the Research Group Changing Role of Europe at The Hague University of Applied Sciences. This book is the result of the Ph.D. research project that he conducted at the Law Faculty of the University of Amsterdam.

Chapter 1 The Creation, Foundation and Exercise of European Council Membership

1 The establishment of the European Council by its future members

7 The exercise of European Council membership

1 The position of the Prime minister until 1960

3 The position of the Foreign Affairs minister

3 Taking responsibility for national and European developments at both levels: Helmut Kohl and the fall of the Berlin Wall

Part of the series: The Hogendorp Papers 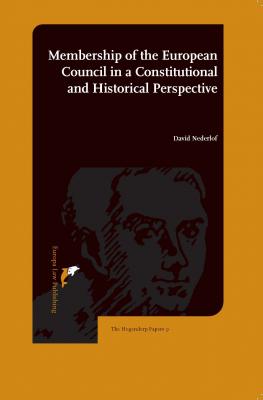