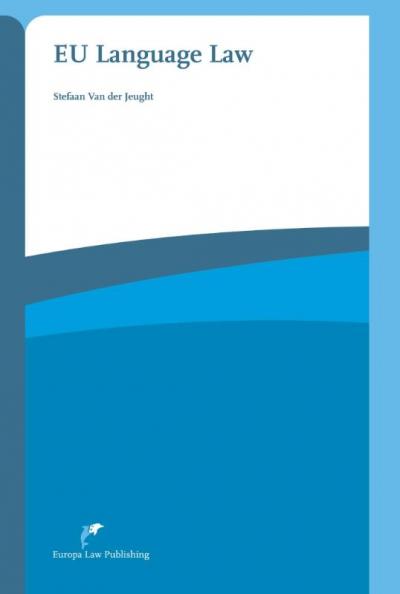 Language Law of the European Union gives a comprehensive account of all language regulations and arrangements which currently exist in EU law. First and foremost, it covers the various explicit and implicit language regimes of EU institutions, bodies and agencies, explaining how and why they came about. It also explores numerous other EU language provisions in the area of freedom, security and justice, relating to quite diverse topics such as road traffic offences, recognition of national court decisions, the European Arrest Warrant and crime victims. It also discusses EU linguistic provisions in the internal market regarding product labelling or the language proficiency assessment of professionals such as medical doctors or lawyers seeking to provide services in other EU Member States. Many other issues such as language testing for newcomers in society and language proficiency requirements for employment are investigated. This book highlights an often neglected, yet tremendously important aspect of EU integration: the language issue.

Stefaan van der Jeught works as an official in the Directorate Communication of the European Court of Justice and is affiliated to the Centre for European Law of the Vrije Universiteit Brussel (VUB). In 2015, he earned a PhD at that University with a dissertation on “Conflicting Language Policies in the European Union and its Member States”.

I. Historical overview
1. The European Coal and Steel Community (1951)
2. The European Economic Community and the European Atomic Energy Community (1957)
3. The European Union (1992)
4. Some concluding remarks: pragmatism in language issues
II. Aims of EU language policy
1. Language equality and non-discrimination
2. European integration and mobility
3. Linguistic diversity
4. Protection of linguistic minorities
III. Scope of EU language policy
1. The scope of EU language policy is comparable to that of national policies
2. Limits of the scope of EU language policy
IV. EU public and private language policy
A. EU public language policy
1. EU Treaty languages
1.1 Decision of the EU Member State
1.2 Maltese and Irish
1.3 Luxembourgish
1.4 Catalan, Galician, Basque and Russian
1.5 Turkish
2. EU official and working languages
2.1 The Council has jurisdiction to establish the EU language regime
2.2 May languages which do not have Treaty language status become EU official and/or working languages?
2.3 Administrative agreements for Catalan, Basque, Galician, Welsh and Scots Gaelic
2.4 And the working languages?
2.5 Obligatory use of all official EU languages (full language regime)
2.5.1 Communications with EU Member States and private persons
a. Personal scope
b. Material scope
2.5.2 What if language rights are not respected?
a. Communications between EU institutions and EU Member States: a case-by-case assessment
b. Communications between EU institutions and private companies: has the linguistic irregularity caused harmful consequences?
c. Communications between EU institutions and citizens: breach of language rights may constitute a case of maladministration
2.5.3 Legislation
a. Publication in all EU languages is a prerequisite for enforceability of legislative acts
b. The challenges of multilingual legal drafting
c. What with discrepancies between language versions?
d. Multilingual legal texts may jeopardize legal certainty
3. Restricted language regimes
3.1 Restricted language regimes for internal purposes
3.1.1 European Parliament
3.1.2 European Council and Council of the European Union
3.1.3 European Commission
3.1.4 European Central Bank
3.1.5 Court of Auditors
3.2 Restricted language regimes in external communication
3.2.1 Information on EU institutions’ websites and in publications
3.2.2 Relations with the media
3.2.3 Public consultations
3.2.4 Contacts with national administrations
3.2.5 Recruitment policy
a. Employees must be proficient in one (or more) working languages
b. The recruitment procedure must be in all EU official languages
3.2.6 Calls for expression of interest (tenders)
3.3 Some concluding remarks: which criteria are used?
4. EU Bodies and Agencies
4.1 Advisory Bodies of the EU
4.1.1 European Economic and Social Committee
4.1.2 Committee of the Regions
4.1.3 Other Advisory Committees
4.2 European Investment Bank
4.3 European Ombudsman
4.4 Other EU Bodies and Agencies
4.4.1 European External Action Service
4.4.2 Independent Offices
4.4.3 Agencies
4.4.4 Office for Harmonisation in the Internal Market: specific (restricted) language regime
a. Historical context
b. Restricted language regime
c. A challenge against the validity of the restricted language regime: the Kik judgments
d. The Court’s judgments have given rise to a fair amount of criticism
4.4.5 European Patent with unitary effect (EU Patent) and unified patent litigation system
a. The long and difficult path towards the EU Patent
b. The options and justifications of a restricted language regime for the EU Patent
c. The language regime adopted for the EU Patent
d. Unified Patent Court
e. Why not look at the actual workload?
5. Special language regime of the Court of Justice of the European Union
5.1 The Rules of Procedure lay down the language regime
5.2 Cases may be brought in all EU official languages
5.2.1 In preliminary proceedings, the language of the national judge is used
5.2.2 In direct actions, the applicant chooses the language
5.3 One language of the case
5.3.1 Authorisation to use another language
5.3.2 Judges and Advocates-General may use their language
5.3.3 French is the language of internal deliberation
5.4 Communication with EU Member States
5.5 Publications of the Court
5.6 Some concluding remarks: the most multilingual Court in the world
6. The area of freedom, security and justice
6.1 Different solutions for the language issue
6.1.1 The use of a common language
6.1.2 Bilateral agreements between national authorities on languages to be used
6.1.3 Standard multilingual forms and translations
a. Judicial and extrajudicial decisions in civil or commercial matters
b. Recognition of court decisions
c. Road traffic offences
6.2 Language rights in criminal proceedings
6.2.1 Suspects and accused
6.2.2 The European arrest warrant
6.2.3 Crime victims
6.3 Language rights for asylum seekers
6.4 Some concluding remarks: the linguistic rights of the ddressee must be respected
B. EU private language policy
1. Consumer protection
1.1 Territoriality principle: the official language(s) of the EU Member State of marketing must be used
1.2 Conditional territoriality principle: EU Member States may impose language requirements
1.3 Mitigated territoriality principle: EU Member States must allow for the use of a language easily understood or pictograms
1.4 EU Member States must allow for the use of a lingua franca
1.5 Freedom of language regarding e-commerce and cross-border commerce, with some language protection for the consumer
2. Linguistic proficiency requirements for employment
3. Recognition of professional qualifications
3.1 The Professional Qualifications Directive
3.1.1 Scope of the Directive
3.1.2 Assessment of the language proficiency of professionals
3.2 Certified translations of documents
4. Broadcasting licences
5. Other preferential language policies
6. Some concluding remarks on EU private language policy: the need for simplification and uniformity
V. Concluding remarks: a more coherent framework is needed
1. The EU is united in diversity
2. The national reference framework
3. The curse of languages
4. Full language regimes only for legislation and direct contacts with EU Member States and private persons
4.1 Legislation
4.2 Direct communication
5. Some EU official languages are more equal than others: many restricted language regimes exist
6. Lack of formal decisions with regard to language arrangements
7. Questionable and non-transparent criteria used for the choice of restricted language policies
8. The absence of language teaching priorities: a counter-intuitive strategy
9. EU multilingualism is self-defeating
10. Insufficient delimitation of jurisdiction between the EU and its Member States
10.1 The EU sword of Damocles in the internal market: proportionality scrutiny
10.2 EU law calls into question the monolingual national frameworks
10.3 The issue of social cohesion at (sub)national level
10.4 The paradox of multilingual EU Member States
10.5 The specific situation of the languages without EU status
10.6 EU restricted language regimes as a source of conflict
11. EU language policy lacks a coherent framework

PART III General Conclusions and Recommendations
1. Clear-cut rules: a new Language Regulation
2. A clearer demarcation between national and EU jurisdiction
2.1 Regulations and directives in the internal market
2.2 The language of the Member State of residence
2.3 Social cohesion policies
2.4 Minority rights
3. The need for a vehicular language in the EU

Epilogue: Coming to grips with the past
Bibliography
Table of Cases
Index